Anyone today who says he wants to save the world and is not vegan, is either ideologically or mentally blind, ignorant or uninformed. The reasons are secondary. First rank is, we have no choice. Unless one intends to accelerate the downfall of humanity. But many are committed to environmental protection, human rights, exploitation and misguided capitalism, without even thinking about the most fundamental of all problems: our diet. And that does not mean that being vegan is limited to your diet. But in the face of an ever-increasing human population, the issue of basic care for all people, with water and food, is becoming ever more urgent. Yes, it is a distribution problem, but without a fundamental change in our way of life, we will not be able to solve this problem. 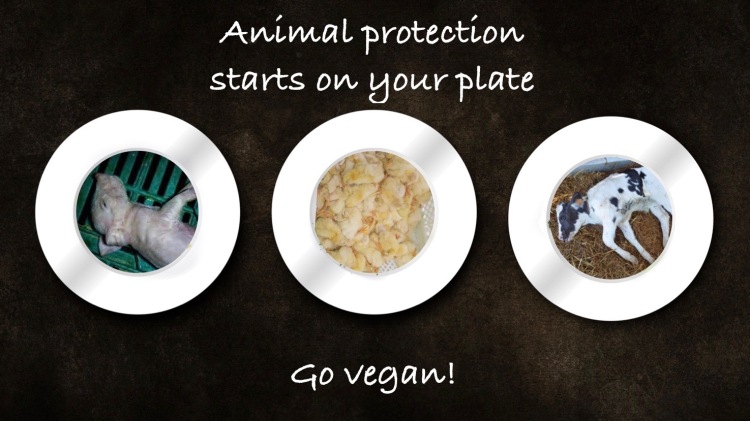 Animal welfare starts on your plate

Every minute, 40,000 land animals die for our use, in any way, be it for consumption, clothing, research or entertainment. Each one of these animals is an individual, a personality who has the right to himself through birth. Probably not yet by the legislation, because according to these animals are still considered as things and for things you can obtain property rights. But if we assume that no one can produce a life, such as a shoe or a book, it is inherent that animals belong to themselves, as a human. But even if we do not acknowledge this, nobody gives us the right to take liberty and self-determination from another individual. But in intensive livestock farming, one goes a few steps further. Not only that animals are locked up, yes penned, in a confined space, used according to precisely calculated plans of modern feed management, we separate families and treat living, sentient beings like machines in production. The calculation has to be right, because ultimately it’s all about the profit that the now oligopoliesed food industry is working on. Therefore, depending on the type of use, the animal must be bred appropriately so that there is no question of species protection or biodiversity.

Within the cows, there are meat- and dairy cows. Meat cows are bred so that they put as much meat as possible in as short a time as possible. This means the lowest possible feed use with the greatest possible yield. In dairy cows, the milk yield is so raised that they now yield three times more than a cow did 60 years ago. This means constant stress and overuse for the body. After three to five years, this cow is ready for slaughter, with a normal life expectancy of around 15 to 20 years. To give milk, cows must get calves. These are taken away from the mother immediately after birth and individually locked in calf boxes, because they are not allowed to drink the mother’s milk, of course, as it is intended for our needs, while the babies are fed with inferior milk substitute. Female calves are used for their future use as meat and dairy cows, while male calves are of no use to the industry, so they are disposed of as soon as possible. In the worst case, you just let them starve to death. Waste of a modern animal industry. 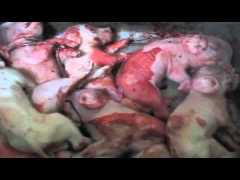 The pigs in intensive animal husbandry are not any better off. Maternal sows are artificially inseminated, that is raped, so that time they give birth to their piglets at the same time. Locked in crates where they cannot move, they are used as pure dairy machines, with the male piglets still being severed without stunning. In addition, all tails and ears are cropped to prevent nibbling. They are penned in a confined space within a very short time, about six months to their slaughter weight of about 110 kg. fattened. Weak piglets that do not reach the teats are simply left lying there until they die. In no single minute of their short, drab life, they are treated differently than machines. There is no social structure, nor the ability to act in an appropriate manner.

Even chickens are trimmed to peak performance. In the first step, the male chicks are sorted out and destroyed because they have no value for the industry. They do not lay eggs and put on too little and too slowly meat. In Austria alone, 9,000,000 male chicks are annually shredded or gassed. Living resources are destroyed on the first day. The female chickens are used for meat mast or for egg production. Within weeks, imprisoned in a hall with no natural daylight, they are led to battle-readiness. All they can do is eat and sleep. Due to the much too fast growth, many chickens tip forward because the chest area is too heavy, since they are bred primarily on muscle meat. The bones can hardly cope with the unnatural growth and break too easily under the load. To take care, that they eat as much as possible, the light is never turned off. At the end of this procedure they are collected, transported away, the hall cleaned, interspersed and the next batch of chicks is put into it. Laying hens, on the other hand, now produce up to 300 eggs per year, in contrast to a normal laying performance of around 30 eggs per year. This leaches out the body, deprives the bone of calcium, so that these chickens are leached out and unusable within a year. They too are disposed of. 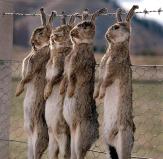 Geese are stuffed for the production of the still popular goose liver and plucked alive to fill our jackets with down. Fur animals are kept in the closest lattice cages for the production of garments, so that their paws become sore, to be killed with electric shock or even skinned alive. Even for hunting, animals are bred, such as Pheasants, to shoot them down for the amusement. No talk of regulating the natural population. 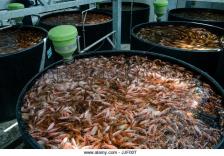 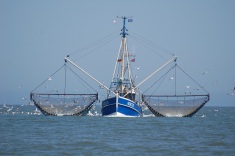 It is not much better for fish, which are now kept in fish farms under similar catastrophic conditions as the land animals. The hunger for fish is now so great that the oceans are exploited. Therefore, fish must be bred in this way.
In addition, animals are used for various types of entertainment, be it rodeo, bullfighting, zoos, circus, dog racing or fighting or dressage. No matter what species it is, animals are forced to behave unnaturally and are torn from their natural structures.

No matter which use, even our cute lap dogs, animals are bred to our needs.
There is only one way to put an end to this torment – go vegan!

Environmental protection starts on your plate

More and more people are worried about climate change. Hardly anyone except a few die-hard ignorants will deny its existence. Now they think that the biggest drivers of change are traffic and power generation. Therefore, they always refrain from driving and use public transport. Travel by plane or even a cruise ship will not be done anyway. In addition, one rises to so-called green electricity and reduces, as far as possible, the power consumption. This is all very praiseworthy and should be done that way. If, nevertheless, the daily schnitzel is not missing, then you have missed something. Because one of the biggest drivers of climate change.

Intensive livestock farming, as currently operated, is a major driver of climate change. But not only CO2 is released, but also methane and nitrous oxide. Here, methane affects 25 times and nitrous oxide by 298 times more than CO2.

The decision for or against the survival of our planet, we meet daily with what lands on our plate. As long as nothing changes our basic eating habits, nothing will change about climate change and we will face the downfall with a clear eye. 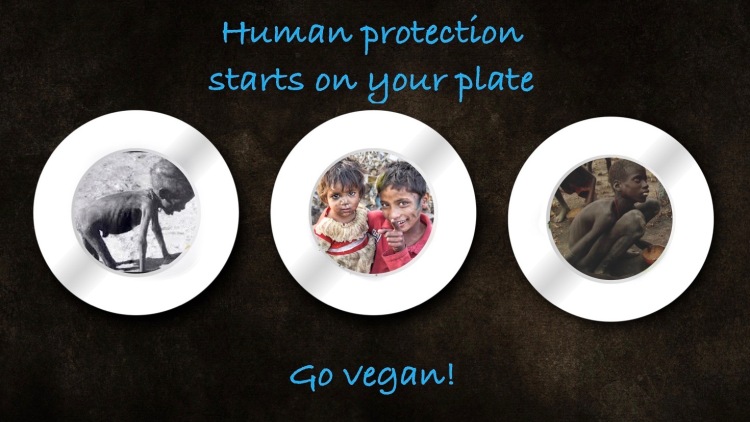 Human protection begins on your plate

„Take care of the people!“, Is said again and again, if you loudly or quietly for the abolition of animal suffering. First of all, it is a convenient way to shirk the responsibility, because caring means you are doing that and all is well. But second, it also shows that most people do not look beyond the proverbial box, nor that our way of life has a major impact on the rest of the world. Our raw materials, and with us is meant the so-called first world, we loot from so-called underdeveloped countries. Economically, we put them under pressure, with so-called free trade agreements, which means freedom on one side only, namely on the first world, while at the same time keeping them at the level of a mere supplier of raw materials. They may purchase the finished products from us. If I sell a cheap commodity and have to buy an expensive, finished product, it will probably be clear to everyone who the winner is and who loses the game. These resources are not just minerals, they are also resources. 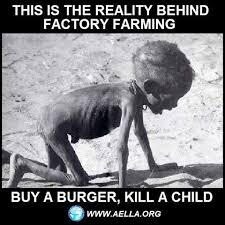 Stabilizing the diet of the world is one of the most pressing issues of the present. Still 800 million people are starving worldwide. Of course, political crises, such as corrupt governments or wars, natural disasters, climate change and social problems such as poverty and unfair food distribution, are also responsible for this. But also the general shortage of resources. We can counteract the latter.

As long as 35% of the world’s grain, 70% of the global soybean harvest is used for animal feed, these resources are not available to humans. In this process, up to 90% of the plant’s nutritional energy and protein are lost as it is used to maintain the animal’s own metabolic process. However, this means that most of it is lost and only the smallest part is converted into meat and other animal products. Only if we omit the detour through the animal and leave these high-quality staple foods to humans, could many more people be fed. A study by the University of Edinburgh has shown that around 1.1 billion tons of crops are used for global food production to produce a meager 240 million tons of animal products. If, on the other hand, all those resources were given to man, then one could feed 4 billion more people today.

In addition, one-third of the world’s arable land is used for animal feed, which is severely degraded by intensive farming practices. Especially in South America, new areas are being searched for the expansion of arable land, because the old ones were destroyed. Not only rainforests are cleared, but also the indigenous peasants are expelled from their fields or killed, because the cultivation of feed is operated by just five groups. 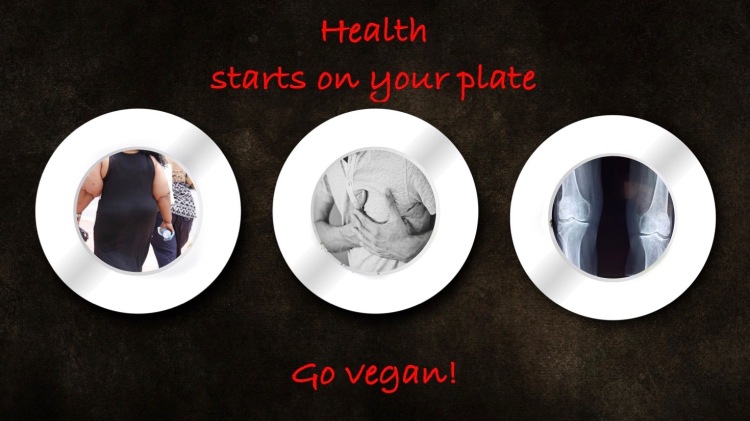 Health starts on your plate

We eat too fat, too sweet, too salty and too much. We are eating sick. Above all, the high proportion of meat in the daily diet contributes to this. Many of the so-called common diseases such as type 2 diabetes, heart disease and obesity are due to the consumption of meat and meat products. The proportion of obesity is increasing rapidly. Cholesterol levels skyrocket. The fats in sausage and meat clog the arteries. The consequences are the typical, and often regarded as inevitable civilization diseases such as heart disease.

A perennial favorite is that we can no longer sustain our healthcare system financially. However, not much is done about people feeding so much that they do not get sick. The solution is very simple. Profiteers are the doctors, the health insurances and above all the big pharmaceutical companies that only make money for sick people. We eat our food and get inspired to do it. Healthy people have no economic benefit, and a person without economic benefits has none at all in the world today. By letting ourselves be persuaded of our diet, we are degrading ourselves to the benefit of the economy.

Self-determination, independence through health is a matter of nutrition – go vegan!

Love of my Life